This is some good news I've had and will be having this month. This time it would be having the opportunity to exhibit with the Royal Institute of Oil Painters this year at the Mall Galleries, London.
The exhibition opens on the 28th of October, 2009 and will run till the 8th of November. If you are in London during that time, it will be worth viewing!


In Summer this year the advert came out in The Artist magazine for an oil painting to be submitted no larger than 36" x 24" for a winning place in ROI exhibition this year and for a mini profile in the November Issue of The Artist Magazine. I gave it a go and I really thank God, I WON! You can read about it in the November Issue of The Artists Magazine and also the interesting article of 100 years of the Royal Charter of the ROI and what to expect this year!

The painting I entered is called Summerlight, Clapham Common it was painted on a 24" x 18" Winsor & Newton linen Canvas and took me almost a week working on the figures from left to right, making sure each section was finished as I worked mainly focusing on the shapes, drawing and values. My mission was to make sure the figures retained a glowing play of summerlight on them and also that the whole piece showed a vibrant, lively, sketchy feel of the excitement and childlike drama that scenes like this invoke on our memories of childhood and those great times. 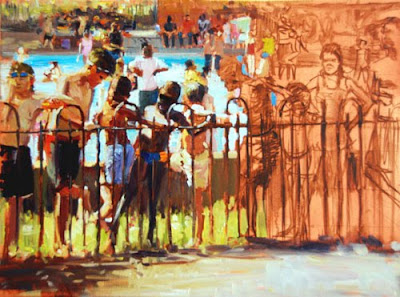 
I discovered I won the prize at the Mall Galleries, as there were 5 shortlisted candidates(James Willis, Rizwan Pradhan, Catherine Gow, James Hirst and Michael Robson) and also 5 judges namely, Dr Sally Bulgin(Editor The Artists Magazine), Peter Wileman (President of ROI), Ian Cryer (Vice President ROI), Dennis Syrett(Past President ROI) and Malcolm Allsop of Townhouse Films. We all came with our paintings and while judging was going on we got to preview the Threadneedle Figurative Prize exhibition which was still being set up. After a while we were called back and the judges said they had unanimously decided that my painting won! All other shortlisted candidates agreed too! 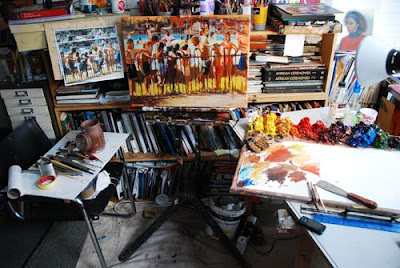 The whole set up in my studio including reference picture/palette. 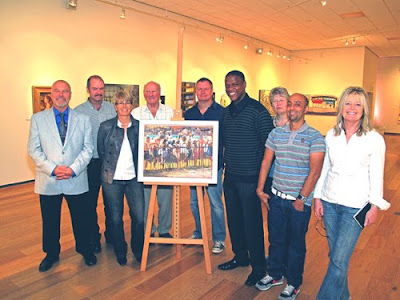 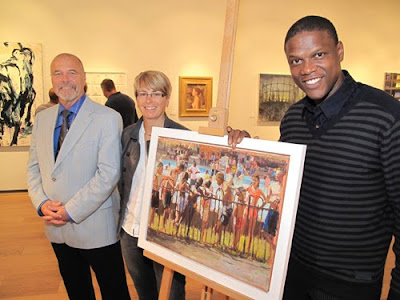