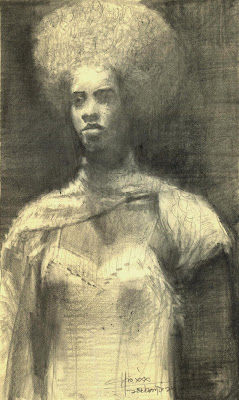 This makes number 30 in my current Afro series, it is made for a contribution into Camille's sketchbook in which the theme was open for us to do whatever we wanted. This is all part of a 13 artist sketchbook exchange called The Flying Moleskins. I used one of those manikins used for display in front Fashion Clothing stores. It is the first time I am not using a real human being for a model, just thought I'll experiment a bit. I liked the stark dark contrast against the highlighted figure and her hair.

This was done with only graphite, my trustworthy medium.