I was recently contacted to paint 3 postcards to help raise some funds for Childhood First, A registered charity that delivers exceptional, cost-effective outcomes in the care, education and treatment of traumatised children and young people. Many other artists ans some celebrities were also involved in this Fund-raising event that took place at The Savoy in London.

Since the guidelines were...

FLYING MOLESKINS FOR Irit AND Dana

These are two pieces I have done for the current sketchbook exchange, called "The Flying Moleskins".I am participating in with 12 other artists.

Irit had as her theme "local places"-I went about this with, What if my Christ visited my Cluttered room? 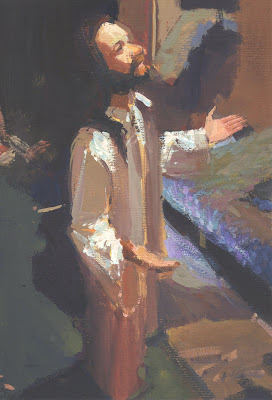 What if Christ came into my clutter? Gouache, 2010

Dana had as her theme "dreams"-I went about this with, another day-dreaming piece of my boy Joshwhen...

Into the streets but more of studio work. This time its not trees but the typical London urban life I love. When it never rains heavy but drizzles all day long. 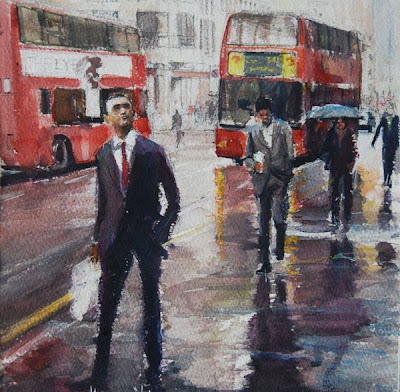 I have sketched so many horses in the past and I love their movement, form and just the smell of being around these fun living things. The sounds they make and the way they are never stable but keep moving.

So this is the first of a series of drawings and paintings on horses called "Horsemotions". It will feature the character, movement, and general well being of these fantastic creatures.

I was just coming out of Charring Cross Station yesterday afternoon and I saw the National Portrait Gallery just peeping out in blazing sunlight from this dark shadowed road way, with so many people out and about as usual in the London west end. I instantly fell in love! Now I am happy I've caught with watercolour, carbon pencil, coloured pencil and gouache on Winsor and Newton Cotman paper...