These are 2 other city scenes of London in acrylic. The Royal Exchange and St Paul's. 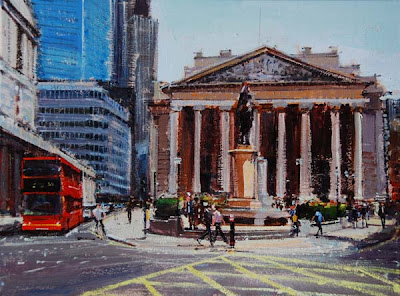 Summerlight, Royal Exchange, 12" x 16", Acrylic on Canvas, 2010- A blazing place to view and paint in the summer. The building takes on new refreshing colours and the surroundings are exciting too. I really like scenes like this because of the contrast between modern and traditional architecture, something very...

This my entry in Karin Juricks DSFDF, the reference was a tray of vegetables, something to depict harvest. But when I saw those crops the first thing that came to my mind was Africa and its market places. African Markets are the most colourful places to behold. There is life, energy, colour and vitality. The noise of the hawkers ans sellers will wake anyone from the dead!

This was the last challenge before the end of 2008 on Karin Juricks Different Strokes From Different Folks.

We were to paint each other and luckily for me I ended up being paired with (now I know) James Parker- He attempts to portray, on canvas, his concern and admiration for the other creatures on this planet, and perhaps capture the imagination of those that view his works. He doesn't consider...

This is my entry in Karin Jurick's Different strokes from different folks.

Immediately I saw the picture reference, I had this feeling I would like to portray street workers. I worked with the homeless at St Mungo's for 9 years helping them sort out their issues and being a motivator to help them tap into their hidden talents and restoring their self esteem by involving them in meaningful...

This is the ninth in the Afro Series I am currently working on. I saw this little girl yesterday at church and I couldn't resist taking pictures of her in her Afro! I worked on one of the shots in acrylic, wax crayons, oil base pencil, biro and coloured pencils on canvas board. 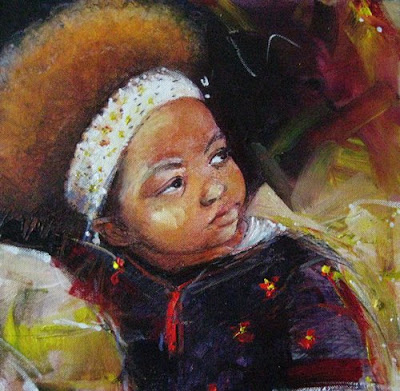 I had to stop a bit early as was on the verge of overworking the piece. Also I wasn't keen on the resemblance as the...