Sketches on the Train, Bus and Tube in January I 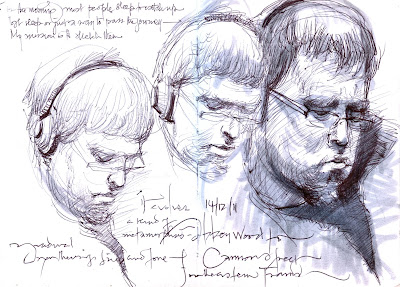 These are some back load of sketches from last year which I haven't posted-they show everything I feel when I observe people everyday. I could catcha sleeping man three times, if he keeps changing the pose! I simply love it! I could catch a lady putting on make-up in a rush on the train-this says a lot about London life! Someone could be right there, staring at me and I'll take it on, full and...

Sketches on the train, bus and tube in December I 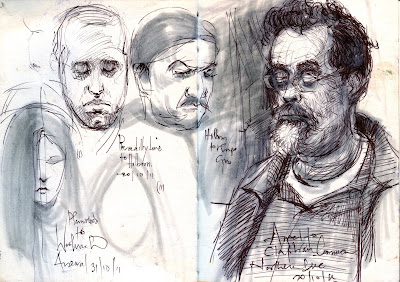 These are my latest sketches on public transport. All these sketches were either done on my way to my studio or when coming back from my studio-I commute from Belvedere in Kent, to Chelsea in Central London, the journey can take between 90 minutes to 180 minutes. Sometimes they happen when I see a face that I just can't resist sketching. I try to make notes on the sketches of where I started and...

This is one page spread of sketches I have recently. I have also decided to highlight the materials I use to sketch, I have done this before but it seems a lot of people still would like to know. I have replied many emails from readers but I have now decided to re-post. I'll do the one of my graphite sketching kit when I return to the trusty old graphite sketches. But for now it's the pen...

Sketches on the train, tube and bus in January I

More sketches of people on on public transport. Some of people I sketch always love to see what I am doing, so I show them. It is quite interesting to see their mixed reactions when they see themselves!

Special quote.
"There is a popular notion that artists are born with the ability to draw, but that isn't true. The impulse to draw is there, but no one arrives in this world with the capacity to...

Sketches on the bus, train and tube in October I 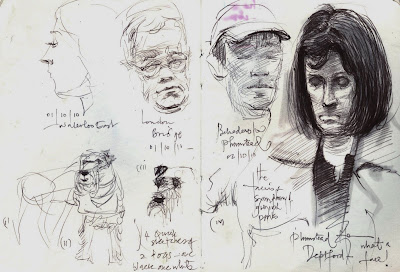 Getting into my routine sketches hasn't been easy and I am really struggling, but the good thing is-I'll be using a more of public transport before I head back to Bath. 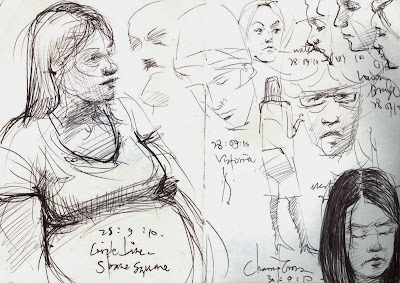 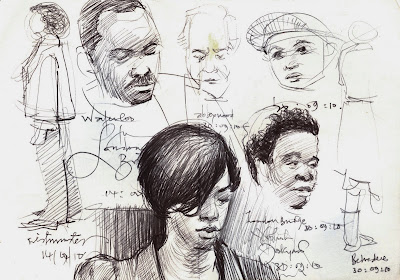