I have worked this this painting over from last year. It is of the City boys after work, at Leadenhall market. The lighting of the place makes this place exciting to paint at any time of the day. This one was done with evening light approaching with the artificial lights also creating a nice mood. 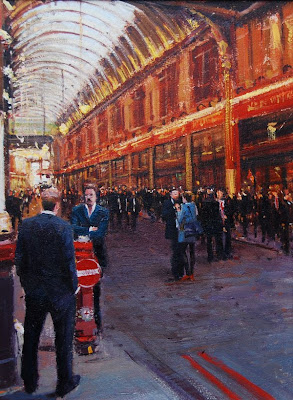 Special Quote
"It has been said that Sorolla worked hurriedly, that he got tired or bored before he concluded or finished a work. This is not true. He painted two portraits of me: one indoors and another in his garden. For each one of them he took more than a month, in sessions of three hours a day. Yet, both paintings seem to have been made rapidly, with fortunate suddenness. The multitudinous quantity of his work must be attributed to his tireless laboriousness. He worked from the early hours of the day until twelve at night, in his studio, in the open air, with artificial light. At the same time that he was painting my portrait he had many others in hand, and when he interposed an interval without a model, he made studies and sketches, or he painted landscapes, charming landscapes. For him the practice of art was a vital function, like breathing. If he had to stop painting, it was as if he were being as-fixated."-Perez De Ayala, assessing Sorolla's manner of working in "Joaquin Sorolla" by Blanca Pons Sorolla