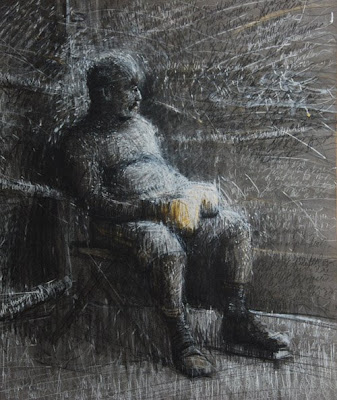 Some of you might know why I have interpreted this as a boxer, who has lost 2 rounds and is almost knocked off balance! He is sitting down at the interval before the third round, looking dazed. He has just escaped a knock out and he is feeling the pain! Thoughts are running through his head....Can I go on? Is it worth it? Should I just throw in the towel?......This is exactly how I felt after the British Airways voting didn't favour me for a second time! But then- This work is about static motion- That period where you contemplate, think, ponder and plan your next move. Like this boxer I am DETERMINED, EVEN MORE FIRED UP! This fight has to continue, this foe has to be defeated! I can make it! So even while working on this boxer- I felt the surge of energy and belief and also I added words, positive words on to the drawing, some of which you may not be able to see on the monitor screen, but they are all motivational phrases and that's it! STATIC MOTION- I may be static, but I am moving, planning my next move and I'm rest assured this battle is not mine but God's! VICTORY IS NIGH! Get up and stick in there! 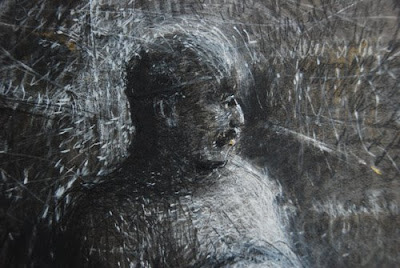