Number 12-The Agony and the Ecstasy

This painting was done in acrylics and ink, It shows an Arsenal fan(I used myself as the model)- by taking pictures of myself in both moods, joyful and then in despair. I planned the composition to reveal both moods but allowing the joyful mood to prevail. It was done in 2 days but took weeks and weeks of planning and thinking. The results came on the 1st of June, 2007 and I was one of the 5 runner-ups in a competition organised by the Barclays Premiership called "Finding Fan Gogh", which won me a £1,000 in 2007! All works submitted were not to be bigger than A4 size, mine was exactly A4 size. We were told to paint anything Football meant to us in the most creative way. It was a way of bringing football and art together.

It was really great, I got publicity in my Local Newspaper and while coming back from Youth Camp the same year, one of the boys bought a daily newspaper and said, "Hey Uncle, is this not your painting?" It was one of the first times I got into the papers here in the UK and it was a real boost to my career! 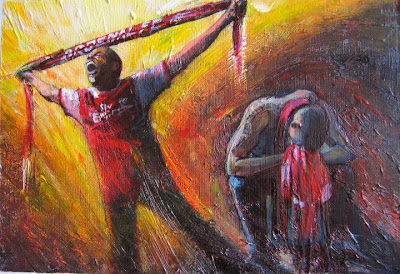 SPECIAL QUOTE
"Does he too use photographs? A very great many figurative or otherwise representational painters use photographs these days, or have done, one way or another. Is it an issue? Well, yes, perhaps it can be; and then again no: it all depends. For there is no rule which lays down what is legitimate to the painter, and what not. The camera, after all, is only a tool, and the photograph another kind of image. And the issue, if issue it is, is only one of what record of detail, aide memoire, primary stimulus-each has its turn and place. What the painter does with it is all that matters, the only principle the integrity of the work- William Packer, 2005 on Tai -Shan Schierenberg