I wanted a painting that would remind me of the pensive nights that I used have while organizing pool competitions for residents of St Mungo's (A charity that hoses homeless people) at Cedars Road in Clapham London. This particular hostel has just been shut down, this week after years of running, which makes me cherish this piece, even more. These pool competitions were a means of engaging and also motivating the residents into being active, competitive and also a good means of socializing with others. It was during these competition nights on Mondays that I learned how to play pool. I sometimes took part myself but my main role was to organise the competitions. There were prizes at stake and and a trophy too. These prizes meant a lot to the residents and especially for the participants. You could hardly hear a pin drop while these games were being played. 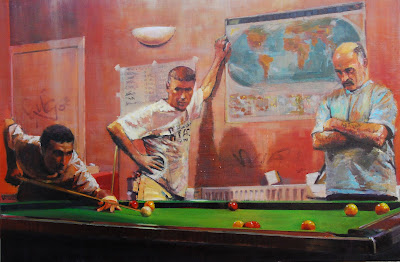 So that's a bit of the background behind this painting. I normally took loads of snap shots while the games were being played and I was always looking for a good composition that would involve the referee and two players. Out of so many hundreds of pictures, I chose this one and animated the way I painted the figures so that I could make the pensive, tense feeling in the atmosphere, show through in the finished piece. It was an awkward colour scheme, I tried to follow the actual colours in the venue but they didn't really work in harmony for a painting but after much thought, I decided to stick with it and keep it that way because I feared that altering might make me loose some of the effects I had at the beginning. I still have this in my studio and I always look back at it with great pleasure of one of the first successful figurative paintings I did on a large scale canvas.

SPECIAL QUOTE
"Great painters are admired by their "look", their brushstokes, their technique. The viewer admirers not only the "look" of the paintings, but also subconsciously, what is behind the paintings-the painter, the lifestyle, the successes, etc. We buy the whole package."- David Leffel