Once again I am thrilled to highlight this category which is known as the Winsor & Newton Young Artists Award, It's a major part of the Annual Exhibition of the Royal Institute of Oil Painters, which opened yesterday to the public at the Mall Galleries and continues till Sunday the 18th of December. It was opened by the President, Peter Wileman and The Rt. Hon, Michael Portillo. This years crowd at the opening is the largest I have seen since I started attending this exhibition! 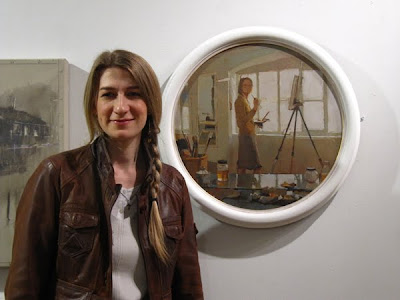 Natalia Avdeeva with her Self Portrait which won the First Prize in this Category.


These are just my personal highlights, as much as I like painting, I also like looking at paintings and writing about artists whose works I love. It is simple as that. This category had 20 paintings by 16 wonderful artists- I am only highlighting nine of them, you just need to get to the Mall Galleries before the show runs out to see the whole show! It's a fantastic exhibition! 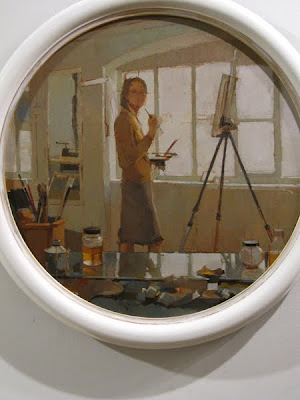 Natalia won the First prize in this category. I wrote about her work in 2009. I also highlighted the fact that she won a prize during the Open Painting Evening that same year. She graduated from Heatherley's and is fast becoming a painter of great acclaim!
Her winning painting which is a self portrait is simply sublime. Never have I seen one done in a round frame, so I asked her, "Why?" and she said, "It's a format that has so much positive energy going round it, something the four corner format holds back." I love the muted colours laid side by side with deft precision. Someone once said,"It is the grays that make a painting sing" and this piece generates a beautiful harmony of grays for me! I also love the fact that since there's back-lighting, her facial features are not apparent but one almost believes they are there. It's what the mind does, it fills in the gaps. 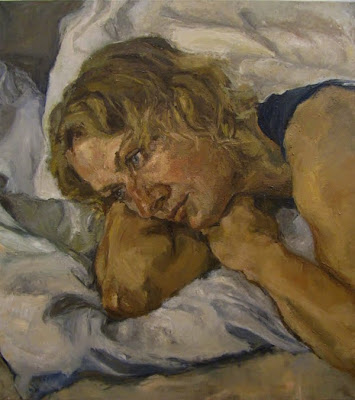 Irena is a new discovery for me. She won the Phyllis Roberts Award of £2,000 to encourage and support a young painter.
Her Painting, "Joanna" captures the mood of someone in a deep thought. She is almost absent from the painting. It's executed in a naturalistic manner with an impressionistic touch, which keeps the viewer fully engaged with her limited use of colours.

Nathan is a star of this category-he won it last year to cap up a hat trick of First place Awards in this section.
His entry this year is what I call, "FIREWORKS". There is no dull moment in his piece titled "Gresleys". I spent a while in front of this piece. He is a artist that combines the act of painting and drawing in such a profound manner, leaving the raw linen canvas and the paint to interact in a fluent combination. This painting was my best piece in the whole show! 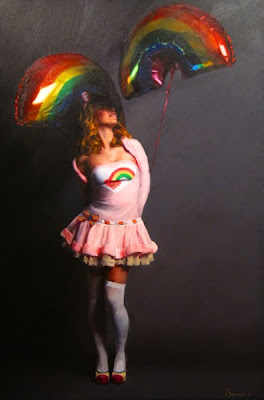 Another discovery! I really love her entry, titled, "Rainbow Bear". The composition clicks just right for me. She accentuates the image on the models shirt with the flow of the balloons in the air. But what really got me hooked and absorbed in this painting was the treatment she gave the models legs. Her legs, especially from her knees down, have such elegance and as Tim Benson also said, "They carry the weight of the body so well." I feel it also reads well amidst a dark ambiguous background. The cool colours she has used here just compliment the jump in the upper half. Splendid to behold! 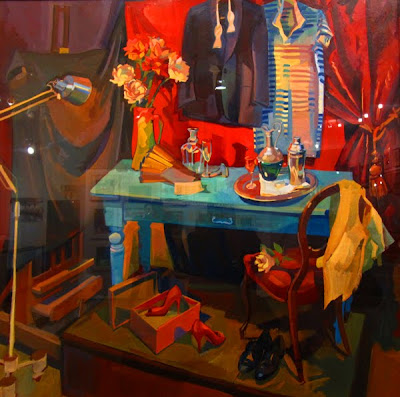 He won the second prize in this category and he is another new artist I've discovered! I spent some time trying to figure out how he managed to control such a busy painting with vibrant colours without it looking chaotic. Now, that's the trick, he is a master, I love his take on still life, it has no figures but almost feels as if it has figures present. 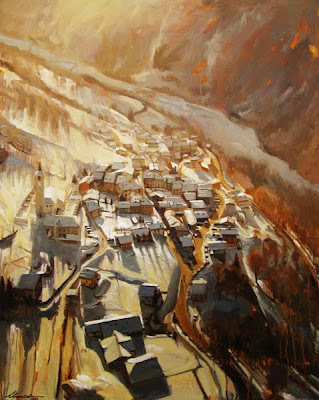 I wrote about Johnny two years ago while reviewing this exhibition, where he had a fluent Rush Hour Scene of Villiers Street. I always knew he had more stuff under his sleeves. This year he had 3 paintings in this section-Which isn't any easy feat! I loved all of them, and because I am plein air painter I was tempted to add the 2 wonderful paintings he did of plein air painters in action-but I just decided to follow my heart and I have chosen this landscape piece which is simply magical! It's in no way a static landscape but radiates with some sort of vigorous explosion!
I met Johnny last week at the New English Art Club Annual Exhibition, where he had another beautiful painting accepted, and he comes across as a very passionate young painter. He is surely one to watch in the future! 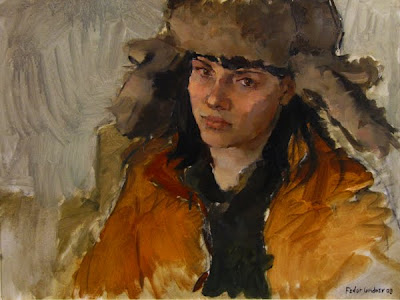 He won the Third prize in this category. This is the first time I have got to meet him. He has won this Award in the past and recently won a top award in the Royal Society of Marine Artists Exhibition.
This painting is what I call "The Beauty of Alla Prima"-There's nothing hidden, you can almost tell how everything was painted, he shows you his hand. The subtle washes are left to suggest what the viewer already knows. It's a typical illustration of: LESS IS MORE!" 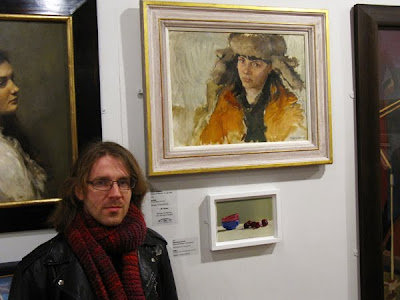 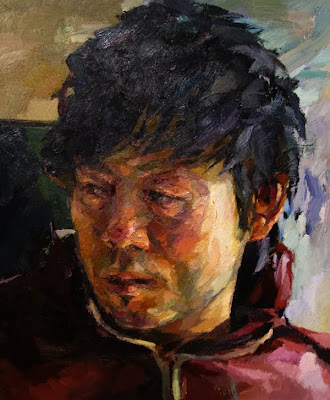 He won this prize in 2009-we were both at Heatherleys around the same time and I have watched his work develop over the years. His self-portraits are getting better and better. Each of them being a careful depiction of himself on large scale canvases in bold, thick, blazing colour. What attracts me most to his work is the surface texture.-Getting close-up to his portrait, allows you to feel the different layers of exciting colour he has placed side by side and over each other to produce a mosaic structured beauty of his face! 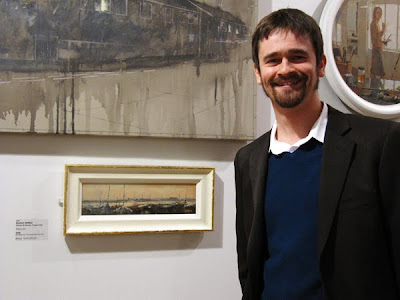 I met Graham at one of my group shows with the Plein Air Brotherhood at Harpenden. He showed so much enthusiasm to learn and discover fresh ways to go about plein-air painting. I was willing to share with him everything I could, in the short space of time we had discussing. So, I wasn't surprised to see one of his plein air paintings in this category. He has painted it in a proper Landscape format and it glows with an underpainting that brings the evening light in the atmosphere, radiant against the cool darks in the foreground structures.