This year the Royal Institute of Oil Painters had it's 123rd Annual Exhibition at the Mall Galleries. The exhibition was opened by the President, Peter Wileman PROI and Comm. Antonio Carluccio OBE. The gallery was packed and the works on display were fantastic!

In this post I just want to highlight a few of the painters from the Under 35 category that got my eye and I must say, ALL the works in this category were super! But I just want to share a few that caught my attention.

I discovered Tim Benson at Heatherleys as he is an open studio tutor there and most recently at Enid Lawson Gallery where I also show my work. Tim's paintings in this show are portrait based and I really like the way he uses bold and heavily textured calligraphic strokes of colour to depict his subjects. The focus here for me is not about the resemblance, but as seen below in his second prize winning piece of his dad looking down, it is about the interaction of colour shapes which when laid side by side or as broken colour, read remarkably well and depict the form and structure of his dad's face. It's amazing to behold! Tim is also a candidate for associate membership this year! 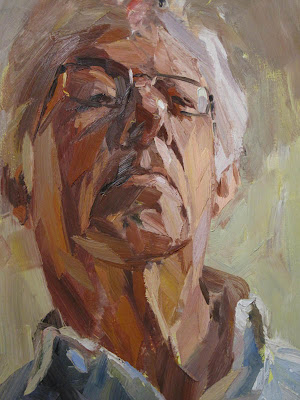 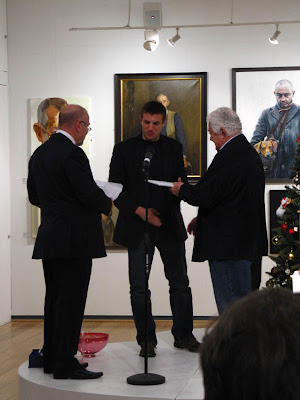 This is the 3rd time Nathan has won this prize, I remember seeing his work about 5 years ago and I instantly fell in love with them because of the mixture of drawing and painting which I love so much but also the fresh dynamic impact it has on the viewer. He leaves out a lot to allow the viewer to interact into the mysterious personality of the characters he portrays. In "Samuel" -you can't even see the eyes of the guy but feel everything that you need to know about him has been portrayed already. I never tire of his work! 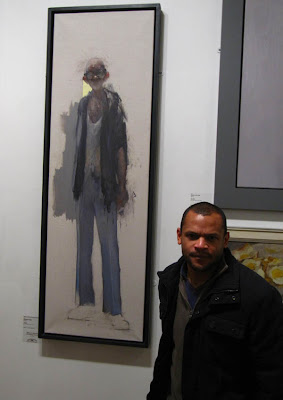 I featured her last year, we got to meet on facebook and via e-mail and I have seen her work in the BP Portrait Award, a couple of times. In this piece, titled,"evening", which had already SOLD this morning when I got there, has a beautiful dramatic evening interior light to it. It resonates throughout the piece and is more evident on the lady's skin. I love the subtle changes in tone and temperature the occur in her paintings! 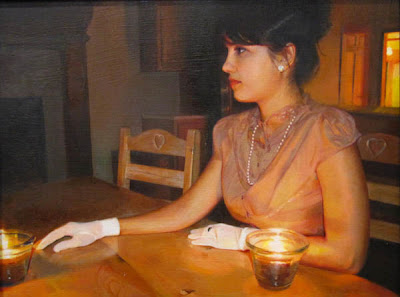 4.BARRY HAINES
Barry is a new discovery and that's what this category has been able to produce since Winsor & Newton decided to sponsor it. In this piece titled "The Promise" Barry has captured the face of a female sitter remarkably well, the thing that I like about it is the play of light on the forms. Looking closely also reveals some textures which add to the sparkle this piece produces! 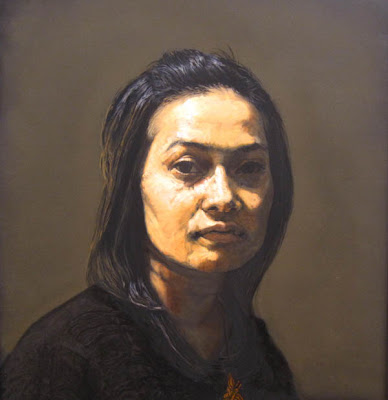 Dave is a great pal of mine. He has been a current and continuous feature in this category for the past 4 or 5 years. This year he had 3 works accepted, which isn't an easy task! Of all three, it's a little landscape with the sun setting that won my heart. You don't need to say much with paint and this piece communicates powerfully! Earlier this year he won the Prize for the Best Plein air work in The Bath Prize. 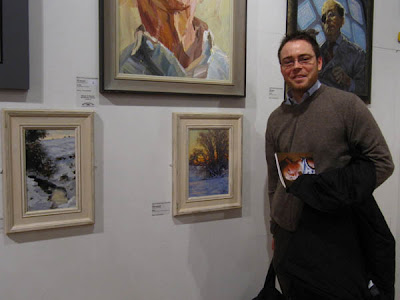 David with his other paintings 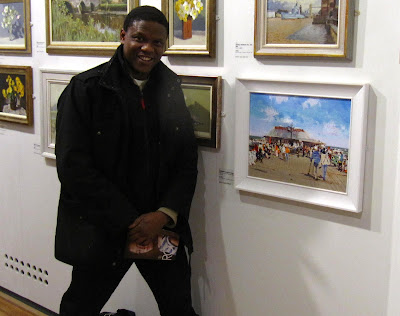 David also took me a picture of me and my work.

Another new discovery. Just looking at the piece makes me love it more. He has exalted the wet on wet technique here and everything is vibrant and fresh with no over-working. The strong angle in which the Borough Market slants, helps to draw the eye into the depth of the picture. It is a fun piece to me! 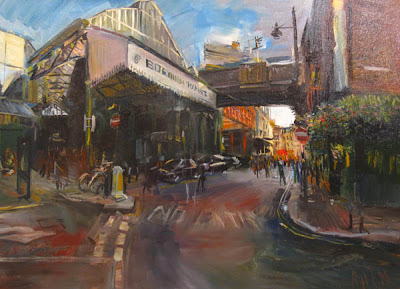 I met Leanne at the show and I had a good time to talk with her and I simply told her that her painting which one two prizes (3rd in the Winsor & Newton and The Phyllis Roberts' Award of £2,000 to encourage and support a young painter)
was an example of what I call, "RUSTIC BEAUTY"- it's an intimate study of a Dog Walker and the dog who the Dog Walker helped to recover from paralysis. It has a very strong impact on the viewer and for a girl at just 23, you bet she is one of those to watch in the future! 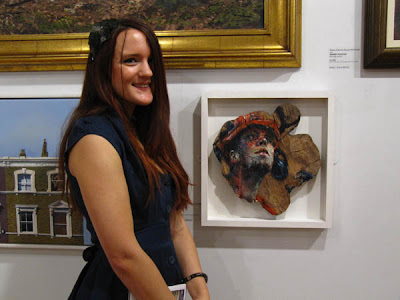 Leanne with her Painting the Woodsman(SOLD) 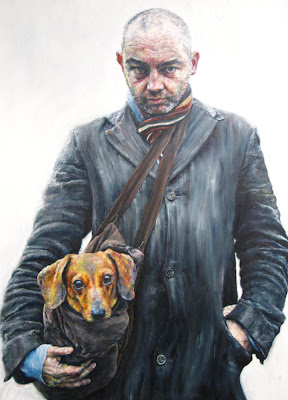 "Post Paralysis"(SOLD)Third Prize and Winner of The Phyllis Roberts Award.


You can see more on the opening in the New ROI BLOG here and this post on the Winsor and Newton Finalists by Katherine in her wonderful MAKING A MARK BLOG, Katherine is going to do an extensive review of the show in a few days time.

The Exhibition continues till the 19th of December, DON'T MISS IT!